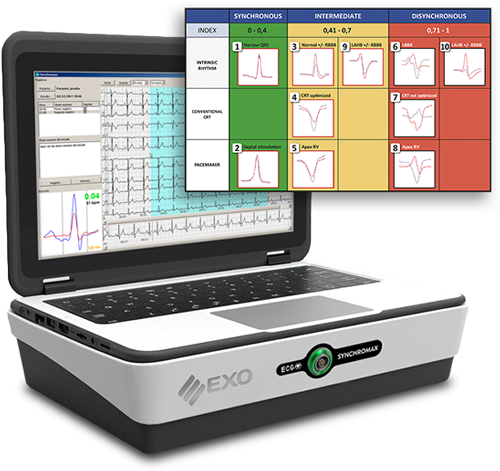 What is Synchromax® and how does it measure electrical synchrony?

Synchromax®, allows the analysis of electrical synchrony in cardiac activation.
With a 12-lead ECG, it performs an amplification and averaging of leads II and V6, electrical expressions of the septal and lateral wall of the left ventricle respectively. By means of cross-analysis of variance, it compares the impulse direction, impulse volume and coincidence of the intrinsecoid deflections of both leads and mathematically elaborates the Electrical Synchrony Index where zero (0) is perfect synchrony and as we move towards 1 the synchrony is progressively lost: QRS synchronous from 0 to 0.4; moderate dyssynchrony 0.4 to 0.7; and severe dyssynchrony from 0.7 onwards. This index is generated in real time, resulting in an advantage when compared to other methods of cardiac electrical synchrony assessment.

Definitive cardiac pacing devices have been implanted in the RV from the beginning, more precisely in the apex of the right ventricle (RV). This implantation site was chosen as the most suitable to avoid displacement and to ensure safe capture with good thresholds.

The deleterious effect of RV apex pacing on the physiology of cardiac contraction has been repeatedly demonstrated by numerous investigators and its disadvantageous consequences on ventricular function performance. This type of pacing may have an even greater impact in patients with heart failure where the loss of physiological activation may worsen the clinical status. Apex pacing is a "non-physiological" pacing as the activation of both ventricles occurs from the tip to the base, in exactly the opposite way to the natural way. For this reason, in the last two decades a more physiological stimulation has been sought by trying to stimulate directly the His-Purkinje conduction system or a neighbouring area that ensures a capture of the His-Purkinje conduction system and the consequent physiological contraction of the heart. Until now the only way to assess the properties of artificial stimulation and its impact on cardiac contractility was the echocardiogram. This method has shown unobjectionable limitations due to its complexity, dependence on the operator's expertise or the technical quality of the method and cannot be used during implantation.

So-called "physiological" pacing aims to reproduce an activation as close to natural as possible and even to correct acquired defects such as bundle branch block that can alter cardiac function. However, until now, the only way to assess the characteristics of pacing was by indirect methods such as echocardiography.

With Synchromax®, it is now possible to quickly and easily assess the pacing characteristics, which allows to determine whether the activation of the right intraventricular septum and the lateral wall of the left ventricle are activated simultaneously and physiologically, the main objective of cardiac resynchronisation. By means of a mathematical index of cross-comparison of the variances of leads II and V6, the Electrical Synchrony Index, provided instantaneously by the equipment, it is possible to know whether the site chosen for pacing is the most physiological possible. The validation of the Electrical Synchrony Index provided by Synchromax®has been extensively demonstrated by studies with intracardiac pressure recording and Doppler ultrasound.

Is it possible to resynchronise without assessing cardiac electrical synchrony before and after?

Therefore, in the presence of a conduction disorder, the most common behaviour is to try to resynchronise the heart with some known method. The curious thing is that even after such therapy, it is not clear whether or not there is a beneficial change in the electrical activation or mechanical contraction of the heart.

The best known multicentre studies show that QRS duration before and after conventional resynchronisation therapies are identical. The Synchromax®study is a true innovation because it is a simple method, using a 12-lead ECG and a special algorithm that cross-matches II and V6, expressions of right septal and left ventricular (LV) lateral wall activation, to produce an Electrical Synchrony Index that tells us whether both LV walls contract in a physiological activation pattern.

Synchromax®allows:
(a) determine whether there is dyssynchrony in basal activation.
b) during the implantation of a device we will be able to know if the place where we fix the catheter allows synchronous activation, and
c) during clinical follow-up, we will be able to make modifications in the programming of the devices, allowing us to provide the best possible synchrony.

Thus, the use of Synchromax®is the most rational way to avoid desynchronisation with conventional pacing or to resynchronise a dyssynchronous patient.

Physiological pacing either by His pacing(selective) or capture of the His-Purkinje system(non-selective) has now become established as the alternative pacing mode to apex pacing. Obtaining a narrow QRS identical to the basal QRS seems to be the only evidence of physiological pacing. However, the use of Synchromax®allows us to observe the simultaneous electrical activation of the septal and lateral wall of the left ventricle, demonstrating that there is no delay in the activation of the left ventricle and that it is activated from the base towards the apex, which are essential conditions for physiological contraction, even if the QRS is wider (non-selective stimulation). The use of Synchromax®reduces procedure times, whether with special sheaths and catheters or with conventional catheters, and provides an instantaneous curve, with an exclusive Electrical Synchrony Index that allows us to quickly know if we are performing physiological stimulation. Synchromax®is an indispensable tool in the battle against dyssynchrony.

Browse through the videos with Synchromax® explanations, interviews and lectures by medical professionals.

Publications of experiences of recognized health professionals on the use of Synchromax®.